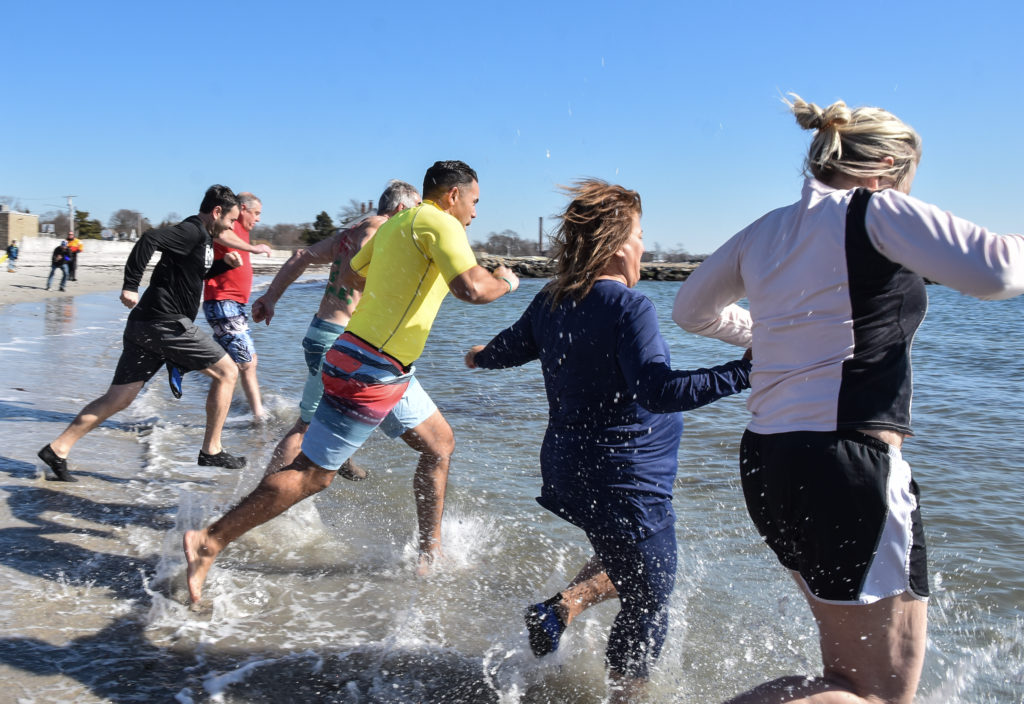 Groton, CT – After reaching and exceeding their $25,000 individual challenge goals, Rodney Butler and Rob Valenti joined a large contingent of Mystic Aquarium supporters who plunged into the surf at Eastern Point Beach in Groton this afternoon for the seventh annual Seal Splash in support of the Aquarium’s Animal Rescue program.  With several days still left to fundraise, the event has raised nearly $70,000 for Mystic Aquarium’s mission programs including its Animal Rescue Program – a new record for the event.

With an air temperature of 42 degrees and the water at a chilly 29 degrees, Butler, Chairman of the Mashantucket Pequot Tribal Nation, and Valenti, President/General Manager of the Valenti Family of Dealerships, were among the over 65 hale and hardy participants.  ‘Splashers’ included staff, volunteers, program First Responders and more.

Mystic Aquarium’s dedicated Animal Rescue Team provides specialized and compassionate care for the rehabilitation of stranded and rescued animals with the goal of releasing them back into their natural habitat. Since 1975, Mystic Aquarium’s Animal Rescue Program has been rescuing, rehabilitating and releasing sick, injured and stranded marine animals along 1,000 miles of coastline throughout Connecticut, Rhode Island and Fishers Island, New York. Under the direction of the National Oceanic and Atmospheric Administration (NOAA) Fisheries Service, Mystic Aquarium responds to hundreds of stranded animal calls each year and provides support to our colleagues at other stranding facilities around the country.

The City that Helps Winter 2022
Read more publications on Calaméo