You Are Here: Home → Getting groceries in the middle of an outbreak

Getting groceries in the middle of an outbreak 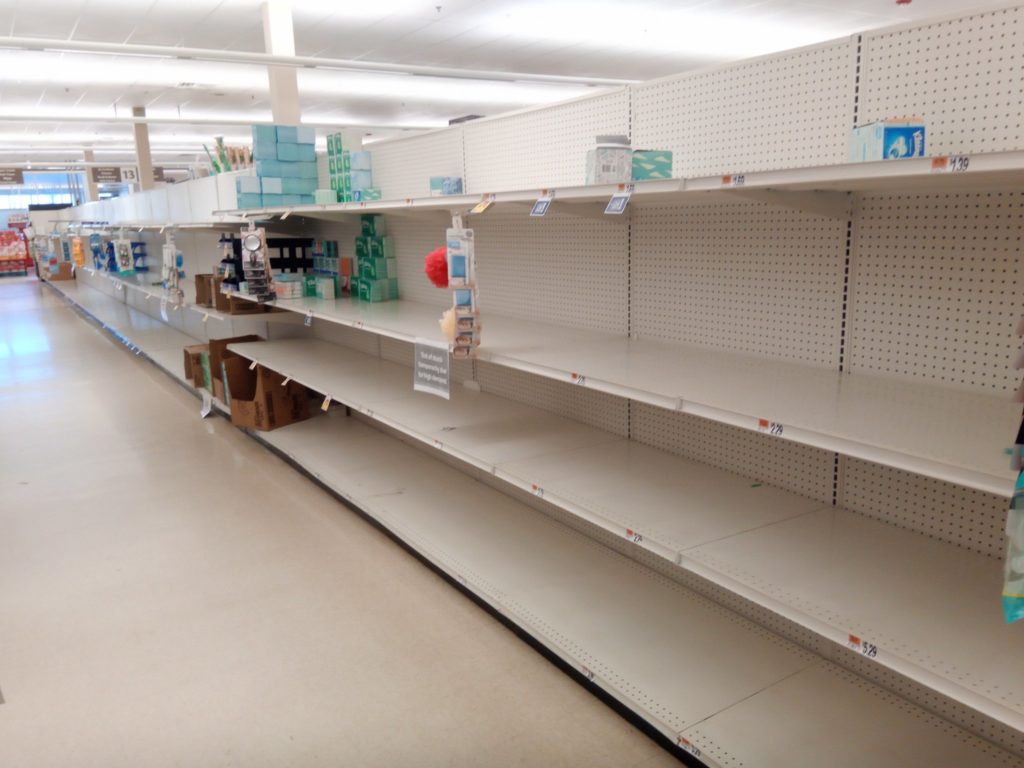 It was like a ritual of sorts. Getting ready to head out into the thick cloud full of an invisible killer. This would be the first time, since the epidemic started hitting our region, that anyone from our family would venture much further past the perimeter of our yard. Even more importantly, it would be the first time since the crisis began that one of us would be in any discernible physical proximity to other human beings. Any other time this would be a welcome respite from the daily grind, but today this counts as an event of an exposure to potential vectors of the novel coronavirus.

But with provisions dwindling, this family of four needs to be fed, so restocking was in order. I guess we could have ordered groceries delivered, but was it really going to be less risky to order? Would adding a few extra hands that would be touching the product be safer than going to the store myself, aware of the danger and taking precautions, like, social distancing, to be as safe as possible? Who knows! Either way, with a dutifully prepared shopping list I got into the car, put the big bottle of sanitizer (yes, we still have some of that liquid gold) and got on the road.

As expected, traffic was much lighter than usual. Yet, surprisingly, in one of the establishments by which my drive took me, had its door wide open and I could see a patron sitting at the bar, while someone else, possibly the server, was a talking with him a few feet away. A few people were jogging and a few others were walking, enjoying the unusually warm early spring day.

Arriving at the store’s parking lot I took stock of the situation, made sure that I have the all-important shopping list and walked to the entrance.

The whole time while I was inside the feeling was strange. The store was seemingly less busy for a late Friday afternoon but this wasn’t the reason for the eerie feeling.

People were quiet, no one was talking loud, no one was looking around to see if they recognize anyone, no one was asking questions or chatting with the associates. Everyone was there with a mission – to get everything they need while making sure they maintain as much distance from other shoppers as humanly possible.

“Good to see you. We’ll talk later, in better times,” was one of the very few phrases I heard anyone utter while I was inside.

The uneasiness was in the air and it was reinforced by the announcements on the store’s radio system, one of which was asking us to respect our neighbors in “this time of crisis” or something similar.

The otherwise teeming with products shelves were marred by large swaths of empty space where previous lucky shoppers were able to find and restock on oatmeal, beef, fish, yogurt and, of course, toilet paper. In fact, even empty, the toiled paper aisle was still one of the most popular places in the store, albeit this time, as a star in many shoppers’ personal photo collection.

I don’t know when normalcy will come back. I know it will. It has to. I am looking forward to the time when we will be able to once again smile and greet each other, stop and talk, and go out and “congregate” as much as we want.

But today, it’s important that we flatten the curve, protect the vulnerable around us and beat this thing. One day, we will declare victory and all but forget about this, but right now, the nightmare continues and until the credits roll we are in this movie together.

The City that Helps Winter 2021
Read more publications on Calaméo