You Are Here: Home → Curtain Call in Stamford streams past productions for free

Curtain Call in Stamford streams past productions for free

While virtually every theatre in the country is dark, like many, Curtain Call’s executive director, Lou Ursone, has been looking for ways to keep his audience engaged.

Thirty five days ago, he started reaching out to his customers on a daily basis by sending brief video clips of about one minute each, along with messages of mostly light banter and updates on what’s happening at the theatre company. A somber tone pops in occasionally as the arts leader faces the unknown.

“When I started doing these daily emails, I knew I’d be at it for a while, but honestly, I hadn’t thought that I’d likely be doing it for several months,” Ursone said. Working from a makeshift editing suite – two snack trays, a laptop and four removable hard drives set up in the family room of his Springdale home, Ursone said he’s had these devices working round the clock. “I’m working from a nonprofessional software package for novices and on a laptop not intended for this kind of use, so the process is pretty slow, but heck, I’m not really going anywhere.” Ursone joked about the editing annex…his living room…where a very old camcorder is plugged into a VHS to DVD converter. That’s where he can create digital content to then edit on the laptop.

“Thank God my wife, Jan, is so supportive. Both rooms sort of look like the NBC tape archives exploded,” he said. At one point, he was combing through 11 boxes of more than 3,000 tapes from an old video business. With a nearly 30-year history and close to 300 shows produced, he says he should be able to keep the daily video treats, as he calls them, going for quite some time.

Ursone is very excited about the two streaming channels that he has launched for Curtain Call. Using the Vimeo platform, anyone with the link can see the library of 15 shows that have been added, and more will be added on a regular basis. “We have two separate channels right now…as I find more content, I may break it down into three. Our Shakespeare on the Green channel has nine of our past productions like Macbeth, The Merry Wives of Windsor, Much Ado About Nothing and more. Our second channel features several original musicals and two plays – The Importance of Being Earnest and Stamford’s favorite, Mulberry Street,” Ursone said. Here’s how to view these past shows:  https://vimeo.com/channels/CCSOG (for Shakespeare) and https://vimeo.com/channels/CCLIVE for the others.

Curtain Call is offering these productions for free so that patrons can go back and watch shows they’ve enjoyed in the past, but several people have been seeing shows for the first time, too. Since launching about a week ago, there have been nearly 1,000 views of those full productions. “I’m shocked and thrilled that so many people are watching the shows,” Ursone said. Since they’ve only been publicized through the theatre’s email list, he didn’t expect such large numbers. It’s uncertain if these will remain available once things get back to normal, but for the near future, they’ll be there.

Presenting some of the theatre’s more recent successes is something Ursone has been working on since this crisis began. Unfortunately, working through the legal aspects of getting permissions from authors, (or their agents and estates) is time-consuming. One of the major theatrical licensing companies, Music Theatre International, has been leading the way for theatres to get copyright clearances. “They’ve been really terrific in terms of doing what they can to help all theatres, but especially smaller organizations like ours,” Ursone said. Not everyone is as easy to work with though. They produced a very well-received original play three years ago in The Dressing Room Theatre, but unfortunately, the author and his partner wouldn’t allow it.

“I really hope we can soon stream Something Rotten, A Gentleman’s Guide to Love & Murder and more, but it’s a wait and see game,” Ursone noted. These newer shows will likely be posted for a specific limited time and be offered on a contribution or Pay Per View platform. The details will vary based on arrangements with rights holders.

Since closing down on March 13, Curtain Call has postponed all events through June which include two concerts, an interactive murder mystery and three full-scale productions: Nunsense, Crossing Delancey and Kinky Boots. All of these events will be rescheduled as soon as possible. The organization’s annual Dancing with the Stars fundraiser has been moved from May 16 to September 19. Dates for the other events as well as the theatre’s 30th anniversary season won’t be available until capacity restrictions on gatherings are lifted.

“Our colleagues at area theatres are in the same boat. None of us know when we’ll be able to get back to doing what we do. Most of us are hopeful for a fall reboot, but it’s too soon to tell,” Ursone said. Keeping the theatre afloat with no income has provided Ursone the greatest challenge of his 20 years at Curtain Call. When he started in 2000, the organization was going through a major transition and there were significant financial struggles, “but our lights were on and we were able to create programming. Now, all we can do is ask our patrons to donate the value of their outstanding tickets back to us so we can continue paying staff, utilities, insurance, etc.,” Ursone added. As always, general contributions are greatly appreciated and can easily be made on Curtain Call’s website: www.curtaincallinc.com or by leaving a message at 203-329-8207.

Like schools, Curtain Call is in the process of setting up distance learning platforms for spring and summer arts programs. They’ve been offering a variety of short classes online for free over the past few weeks. The new programs will run until on site activities can resume.  “In the long run, these virtual classes may actually become a regular part of our programming going forward, in addition to our “live” classes…who knows,” Ursone said.

“The show must go on…but we’ll have to wait to see when,” Ursone said.

Curtain Call is the non-profit community-based theatre company in residence at The Sterling Farms Theatre Complex, 1349 Newfield Avenue in Stamford, CT 06905. Year-round productions and educational workshops for all ages are presented by and for area residents in The Kweskin Theatre and The Dressing Room Theatre. 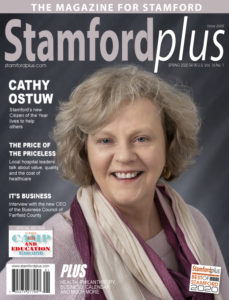